ARBOR Technology, a leading IPC provider of embedded computing solutions, announces the immediate availability of the EmQ-i2200 Qseven module based on the new Intel® Pentium® / Celeron® processors (Intel® codenamed Braswell). Based on this new premium class low-power design, the robust Qseven modules consume on average just 6 watts while providing increased graphics capabilities and overall performance. Up to 16 graphics execution units can support up to three HD displays or two 4k displays and achieve a theoretical peak performance of 358.4GFlops per second. Additionally, the widely scalable general processing power - from 1 GHz dual-core to 2GHz quad-core - prepares the modules for a whole range of fanless and rugged embedded computer designs based on the Qseven footprint. 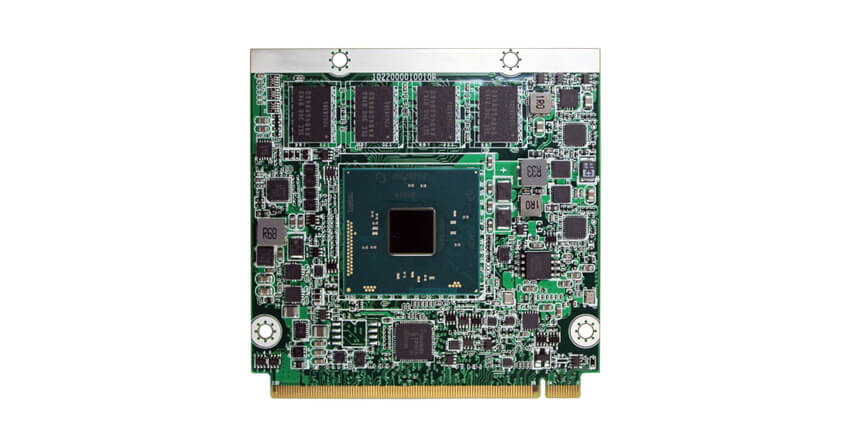 The EmQ-i2200 module comes in three different processor versions for high scalability. These range from the entry-level dual-core Intel® Celeron® N3060 with 1.6/2.16GHz to the quad-core Intel® Pentium® N3710 with 1.6/2.4GHz, each with a power consumption of 4 watts for standard applications (SDP = Scenario Design Power).

The Qseven module is equipped with up to 8GB dual channel DDR3L memory and up to 64GB eMMC 5.0 for mass storage. The enhanced integrated Intel® Gen8 graphics supports DirectX 11.1, OpenGL 4.2 and OpenCL 1.2. The new high-performance, hardware-accelerated video decoding of H.265/HEVC, requires a 50% lower data rate compared to H.264/AVC, making it possible to stream 4K videos in real time.

Up to 4K (3840 x 2160 pixels) resolution is supported by either the DisplayPort or HDMI interfaces. In addition, the EmQ-i2200 module has a default 24bit LVDS interface. The Qseven specification includes an optional pin out which replaces the LVDS interface by two sets of Embedded DisplayPort signals. This optional implementation allows operating 3 independent displays.

The EmQ-i2200 will be officially released in December; please contact local sales support.
The following CPU variants are supported by the module:
Back
We use cookies and we collect data regarding user behaviors in the website to optimise and continuously update this website  according to your needs. Please click on “Cookies” for detailed information on the use of cookies on this website. If you click “I agree”, - cookies will be activated. If you do not want cookies to be activated, you can opt out here. The settings can be changed at any time under “Cookies”.
I agree
Login to get More information